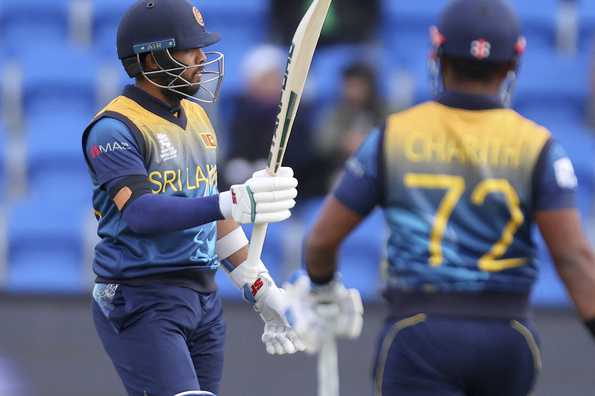 Kusal Mendis's unbeaten 68, following a disciplined bowling show led by spinners Maheesh Theekshana (2-19) and Wanindu Hasanraga (2-25), set up Sri Lanka's nine-wicket thumping of Ireland in their 2022 T20 World Cup Group 1 fixture in Hobart. Regular strikes up top and a dramatic late collapse on the other side of a 47-run stand between Harry Tector (45) and George Dockrell had kept Ireland to a sub-par 128/8 from their 20 overs. Mendis and Dhanajaya de Silva kicked off the modest chase with a brisk 63-run opening stand, guiding Sri Lanka home with five overs to spare.

Until Stirling welcomed Chamika Karunaratne into the attack a four and six off successive balls, it was a less than ideal powerplay for the team that wanted to bat first. Ireland lost two in the powerplay, in the space of 15 balls, in a near identical fashion. Andrew Balbirnie shuffled across to ramp a full delivery over short fine, and left his stumps exposed in the process for Lahiru Kumara to knock down his stumps first ball of his spell. Likewise, Locran Tucker was bowled round his legs, trying to target the vacant legside field against offspinner Maheesh Theekshana.

Stirling's brief assault had only pushed Ireland's score to 40/2 at the end of powerplay, but they sank further when Dhanajana de Silva had the hard-hitting opener caught in the deep courtesy a fine diving effort from Bhanuka Rajapaksa. Seven balls later, Curtis Campher cut a well directed short ball from Karunaratne straight into the waiting hands of backward point fielder. At the halfway mark of their innings, Ireland had only crawled their way to a troublesome 60/4.

A good 47-run partnership - built on some excellent running between the wickets - kept Ireland afloat for the second half of their middle-overs. Tector punished Hasaranga for bowling too short, hammering the pull over deep midwicket, but barring that, the pair were just happy to keep the scorecard ticking in ones and twos when Sri Lanka didn't allow many boundary hits. However, it all came undone with a slog-overs collapse of 4 for 11 in the space of 12 deliveries. COVID-positive Dockrell was the first to fall as Theekshana wrapped up a fine spell with figures of 2-19. Binura Fernando denied Tector his half-century by five, throwing in a tempting full-toss that the batter mishit straight mid-off. Left with little choice, Dealny and Adair both went for big shots against a returning Hasaranga in the penultimate over and holed out to deep midwicket in the space of four deliveries, leaving Ireland reeling at 118/8.

Openers give SL a brisk start

Mendis got them going when he pulled Joshua Little over midwicket and then hooked another one banged in short over fine-leg ropes across the two overs of the left-arm pacer's opening spell. At the other end, de Silva got a life on 11 when Ireland opted not to review a caught-behind appeal that, on replays, showed some spike. Later in that over, the opener thumped McCarthy into deep midwicket stands. Ireland could have still managed to restrict the damage next over but the run-out attempt was a narrow miss. De Silva pulled another short ball from Adair to the midwicket fence for four off the final ball. He raised the team's fifty, and that of his opening stand with Mendis, with a four of Delany but fell in the legspinner's next over, getting a faint top-edge on the cut.

Mendis finishes it off in style

Mendis continued to find boundaries at will, and brought up his second successive World Cup fifty with back-to-back fours (and a dash of luck) in 37 balls. Charith Asalanka, too, fetched consecutive boundaries off a returning Little, in a17-run 14th over. Mendis then opened and closed Simi Singh next over with a six - the first pulled over long-on and the second swept well over deep square leg - to comfortably wrap up the formalities with five overs still left in the bank. His 43-ball knock featured three sixes and five boundaries overall, while de Silva and Asalanka both chipped in 31 each.