I don't want sticky wicket as headline for defeat - Balbirnie 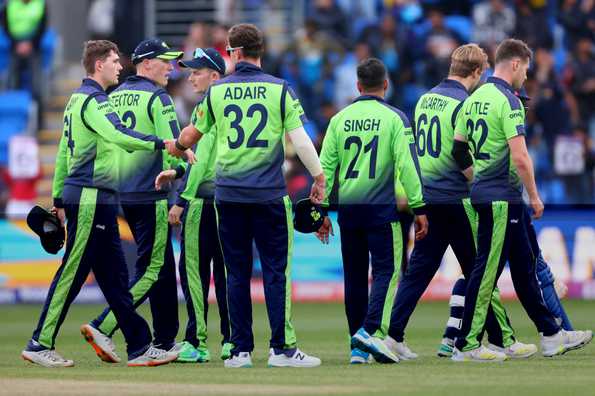 Ireland skipper Andrew Balbirnie refused to use the playing surface as an excuse after his side's nine-wicket loss to Sri Lanka in the 2022 T20 World Cup Super 12s game at Hobart.

Having opted to bat on a slightly sluggish surface, Ireland only managed to post a total of 128 - a score that was comfortably chased down with five overs to spare. The surface at the Bellerive Oval did appear to be slower than in Ireland's previous matches at the venue in the tournament but Balbirnie chose not to read too much into it.

"I wouldn't say it was a sticky wicket. I don't want that to be the headline," chirped Balbirnie at the post-match press conference. "It certainly was not a bad wicket at all. The odd ball did sit up a bit, but it was still a pretty good wicket. We've been fortunate here in Hobart to have good wickets all week," he added.

How Ireland would tackle Sri Lanka's spinners was always going to be one of the major sub-plots of the game. As it panned out, the Lankan tweakers collectively recorded figures of 5/57 from their 10 overs. Balbirnie admitted that his batters weren't able to cope with the challenges thrown at them.

"You have to give them credit. They're pretty impressive figures, but we've played a lot of cricket against good spinners, so we should have, maybe played better."

One of Ireland's go-to methods against spin has been the effective use of the sweep shots. However, it wasn't a ploy that worked in this encounter with the skipper and Lorcan Tucker falling to the broom stroke. Balbirnie, though, defended the methods and backed his side to continue with the methods.

"I think in the T20 format there's so many games, you just have to stick with your strengths. And some days they'll come off, and some days they won't. Unfortunately for me it didn't come off for me today, but it's not a shot I'm going to be putting away.

"They are naturally good spinners, and good spinners are hard to hit boundaries off. You have to be innovative. We weren't able to do that today, and, unfortunately, the figures you said just played a big part in today's game."

While the defeat dented Ireland, the margin of it has also been a matter of concern with the net run rate likely to be a factor later on. However, Balbirnie defended his bowling attack despite the relative ease of the run chase.

"Like I said, they batted pretty well. We came hard at them in the power-play, and they rolled that wave a bit and kind of got away from us. If we had 150, 160, could have been different, but 128 in this day and age, you're not really in the game," he said.

Ireland's next fixture will be against their more fancied neighbours England. The two sides haven't met in a T20I since 2010 and Balbirnie expressed his excitement over the imminent challenge.