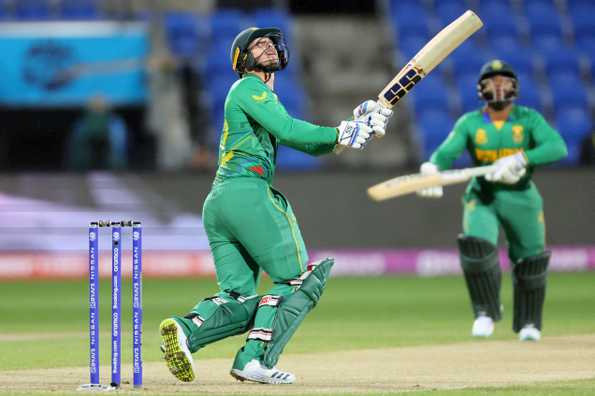 Despite Quinton de Kock's best efforts, South Africa had a damp start to their Super 12 campaign as they ended up sharing the points with Zimbabwe owing to repeated rain breaks. In a game that started as nine-overs-a-side fixture, Zimbabwe got to 79/5. More rain interruptions meant SA had to chase 64 off 7. They were on course to secure the victory until another spell of rain came to deny any further play. The umpires pushed hard for a result, sometimes too hard as the players continued even when the drizzle got heavier, but they eventually took a call when the situation was untenable.

How was Zimbabwe's start?

They actually made a horrendous start. Kagiso Rabada and Wayne Parnell got the ball to bounce and zip through after a lengthy rain delay. Parnell stuck the first blow as Sean Ervine tamely hit one to Lungi Ngidi at mid-on. Ngidi then came on to take out Regis Chakabva and Sikandar Raza in the same over before Sean Williams was run out in the fourth, to reduce Zimbabwe to 19 for 4.

Thanks to the adventurous Wesley Madhevere. He shuffled all across the stumps, premeditated his shots and found gaps to get fours at will. He hit Ngidi over covers early on, took risks against Keshav Maharaj and then went on to smash 17 off Rabada's over - involving a pull for six over deep midwicket, one ramp shot off a slower one over De Kock's head and then a cut over backward point. The final over fetched 19 runs - 5 of those coming as a result of the ball touching de Kock's glove when he had taken it off and put it on the ground. Anrich Nortje also gave away four leg byes. Madhevere ended his innings unbeaten on 35 off 18, adding 60 for the fifth wicket with Milton Shumba, who got 18 off 19.

It was already drizzling when South Africa came back for the chase so De Kock showed urgency and went after Tendai Chatara in the first over. The result was an over of 4 4 4 6 4 1 to start the chase off. Chatara tried everything - bowled at the pads, bowled short, went full and even a little bit of swing - but all of it was met with absolute disdain from the keeper-batter. South Africa collected 23 off the over - the most in an opening over of a T20 World Cup fixture. But the rain kept getting heavier and the umpires forced them off the field after 1.1 overs.

By the time play resumed after a short break, South Africa's target was revised to 64, to be hit in 7 overs. De Kock continued the carnage by hitting four fours off the next five deliveries from Richard Ngarava, taking South Africa to 40/0 in 2 overs. But conditions were tough, as Ngarava slipped and fell after bowling the over and had to limp off the field. The drizzle was back but umpires allowed the play to go on in search of a result. Raza then came on a bowled a tight over in relative terms, denying the South Africa batters a boundary but conceded 11 off it. With that South Africa reached 51/0 in 3 overs. De Kock hit eight fours and a six in a manic knock of 47 from 18 balls. But by this point, the rain had picked up pace again and the umpires signalled for the players to go off the field.

There was no room to comeback?

With only eight minutes left for scheduled play and rain not relenting, there was no option but for the players to shake hands and take just a point from this fixture.