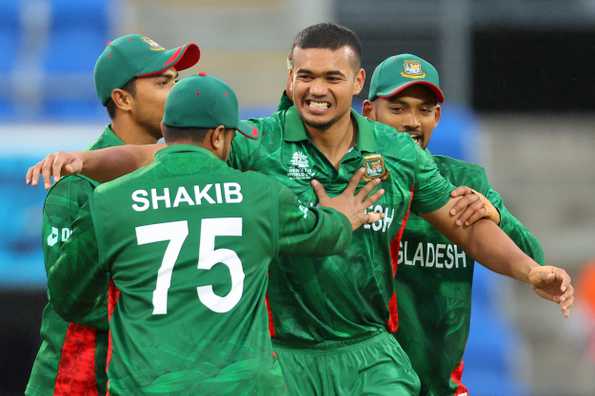 Bangladesh kickstarted their T20 World Cup campaign with a tight win over Netherlands on Monday (October 24). Riding on a four-fer from Taskin Ahmed, Bangladesh were on course to winning comfortably before a late cameo from Paul van Meekeren gave them a slight scare right at the death. Eventually, the Asian side held their nerve to prevail by nine runs and pick up a much-needed win.

Why was it a much-needed win?

For starters, Bangladesh's woes in the T20 format are well documented. They weren't exactly favourites for this clash either given Netherlands had a bit of momentum on their side. Bangladesh had also never played a T20I on these shores prior to this game which added more intrigue. With bigger challenges ahead of them in this group, Bangladesh definitely had to kickoff with a win over Netherlands before taking on stronger oppositions. From that context, this win would have definitely served the purpose.

How did they fare with the bat?

It was a case of another day, another new opening combination for Bangladesh. But this time, it did look like they made the right call. Soumya Sarkar was back in the fold again and Najmul Shanto looked in very good touch. The two batsmen gave Bangladesh a solid start against a side that has bowled very well in the powerplay up until now. But things turned in stunning fashion after they added 43 in the opening five overs. Van Meekeren returned to the attack to get rid of Sarkar and in the very next over, Tim Pringle struck to remove Najmul Shanto. Logan van Beek, who had come in for Roelof van der Merwe, picked up a wicket in his first over as well as the dangerous Liton Das failed to clear the man at mid on. The procession continued as Shakib Al Hasan also failed to make an impact while attempting a sweep as Bangladesh found themselves struggling at 63/4, which soon became 76/5.

That was down to Afif Hossain who led the recovery. The diminutive left-hander was looking for runs despite Bangladesh's struggles. He hit Shariz Ahmad for a boundary and a six and guided Bangladesh to 120/5 after 17 overs. Bas de Leede then pulled Netherlands back again with an over that saw two Bangladesh batsmen get dismissed before Mosaddek Hossain dragged his side past the 140-run mark.

Self destruction from the Dutch

145 was a challenging target in these conditions but the Netherlands could have put up a much better fight. Instead, they ended up self-destructing as Taskin struck off the first two balls of the innings. Both Vikramjit Singh and de Leede ended up edging behind as the bowler found a bit of movement and bounce on this surface. Colin Ackermann survived the hat-trick ball but more misery was in store. Netherlands lost two wickets in the same over again in the powerplay and this time, it was due to poor communication as Max O'Dowd and Tom Cooper got run out. That poor passage of play saw them slip to 15/4 in the chase of 145.

How did they get close?

Thanks to Colin Ackermann, Netherlands still didn't throw in the white towel. Ackermann took a bit of responsibility following the two run outs and was the lone man fighting. Wickets did keep falling at the other end in regular intervals but Ackermann appeared to be batting on a different surface, fetching boundaries on a consistent basis. When he raced to 50, Netherlands had only 76 in total on the board. But Taskin came back for his final over to add two more wickets to his kitty, including Ackermann's at a crucial juncture to pretty much end the Dutch's hopes. At least that's what Bangladesh thought. The batting side needed 40 from the final three overs with only the last batting pair remaining. They managed to knock off 30. Van Meekeren fetched a boundary each off Sarkar and Mustafizur before taking on Sarkar again in the final over. In the end, there was just too much to be done in that final over as the bowler managed to come out on top.

Both these sides have sterner tests ahead of them. While Bangladesh will be taking on South Africa in their next encounter, Netherlands will be up against India. Good luck toppling those sides!!