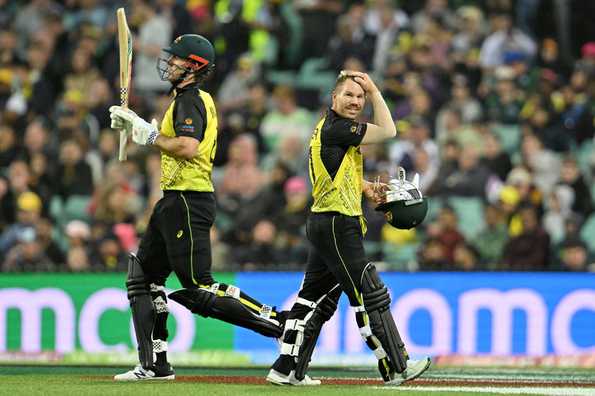 It has seldom been easy for a team entering the T20 World Cup with the tag of defending champions. In the past six editions, a T20 World Cup winner has entered the semi-final stage of the subsequent event only twice. India, England, Sri Lanka and West Indies would know about that, having failed to enter the last-four stage in 2009, 2012, 2016 and 2021 respectively. Even Pakistan and West Indies, who made it to the semis in 2010 and 2014, failed to go beyond that. It's now Australia's turn. Which club will they join?

In a strong group where a setback can prove rather costly for any team, Australia suffered an 89-run drubbing by New Zealand in the Super 12 opener. With a net run rate of -4.45, and other teams getting off to winning starts, Australia have their work cut out. The top-order, which failed to come good in a key encounter, will have to pull up the socks - starting with skipper Aaron Finch. Australia's bowling, one of their stronger suits, did not click against the Black Caps but the home team will bank on Josh Hazlewood's good record against Sri Lanka's top three to keep them in check. Australia will also hope that Pat Cummins and Mitchell Starc, who have only picked up 10 wickets between them in the powerplay since 2021, can improve their record going forward in the competition.

Meanwhile, Sri Lanka's T20 World Cup campaign appears quite similar to their Asia Cup journey. The wake-up call they received after the loss to Afghanistan propelled them towards the Asia Cup title and they received a similar fillip in Australia as well. Having started with a loss to Namibia in the group stage, Sri Lanka have recorded three victories on the trot which will give them confidence going up against the hosts. Maheesh Theekshana and Wanindu Hasaranga led with the ball, which was followed by good knocks from Kusal Mendis, Dhananjaya de Silva and Charith Asalanka in a clinical nine-wicket win against Ireland to kickstart their Super 12 assignments. While Australia are a lot stronger when compared to Ireland, Sri Lanka will fancy their chances against a battered team which is seeking new direction.

What to expect: England posted 208 against Australia in a bilateral T20I played here recently and the chasing side came quite close, getting to 200. On the other hand, Afghanistan were bundled out for a lowly 112 by England, who were made to sweat in the chase in their opening Super 12 game. Temperatures are expected to drop to 15 degree Celsius in the night.